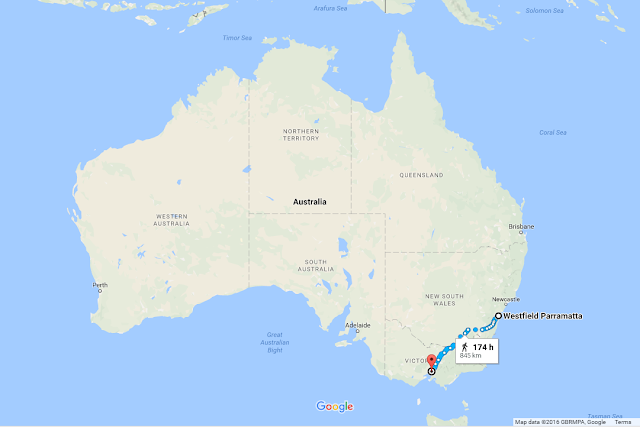 I will write this post in English. Actually, I will mostly just re-print information from several sources, but I will show all references, in order not to incur in plagiarism.

This is the story of an ordinary man who performs extraordinary feats. His name was Cliff Young, and he was the least likely hero that any Nation could come up with. 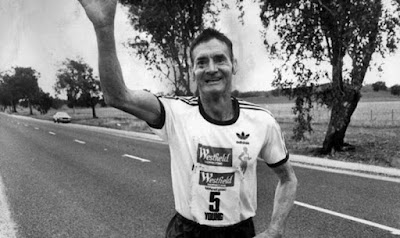 "Cliff Young’s story is unique. While most athletes achieve success in the prime of their lives – their late teens, 20s and even 30s – Young didn’t gain notoriety until his early 60s! In 1983, at 61 years old, Cliff Young entered the Westfield Sydney to Melbourne Ultra-marathon, a 544-mile race from Sydney to Melbourne."

"The Westfield Sydney to Melbourne Ultramarathon was an annual ultramarathon foot race held between 1983 and 1991. It was sponsored by the Westfield Group, with the start being at Westfield Parramatta shopping centre and the finish at Westfield Doncaster shopping centre (formerly known as "Doncaster Shoppingtown").
The 875-kilometre (544 mi), five-day event was regarded as one of the toughest in the world. It was particularly notable for having been won in 1983 by Cliff Young, an almost unknown 61-year-old potato farmer from Beech Forest, Victoria. The record is held by Yiannis Kouros: 5d 02h 27m.[1]
https://en.wikipedia.org/wiki/Sydney_to_Melbourne_Ultramarathon 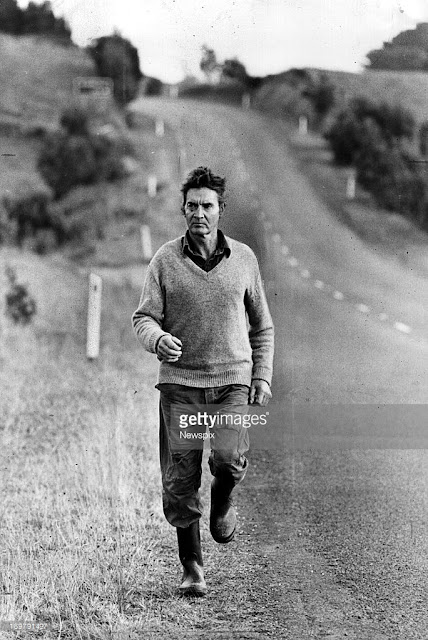 «What’s even more impressive than a 61 year old potato and sheep farmer even being able to complete such a race in the allotted time is that, he not only won, but shattered the world record for that distance, beating it by over two days.
Young showed up at the event on April 27, 1983 wearing overalls and gumboots, though he later used ten pairs of shoes during the event.  His running style, like his attire, was also very unconventional, being more of a shuffle than a run.  In the beginning, the other runners easily took the lead with Young and his slow shuffling style lagging behind.  However, unlike the other runners, Young didn’t plan on sleeping much throughout the event.  Most runners planned a schedule of about 18 hours running / 6 hours sleeping.   Young, however, didn’t feel sleep was necessary because, in his youth, he’d herded about 2000 sheep on a 2000 acre farm (about 3.12 square miles).  Occasionally that would mean rounding them up by literally chasing them around for two or three days straight with no sleep and constant running.  In his own words:
“See, I grew up on a farm where we couldn’t afford horses or four wheel drives, and the whole time I was growing up– until about four years ago when we finally made some money and got a four wheeler– whenever the storms would roll in, I’d have to go out and round up the sheep. We had 2,000 head, and we have 2,000 acres. Sometimes I would have to run those sheep for two or three days. It took a long time, but I’d catch them. I believe I can run this race; it’s only two more days. Five days. I’ve run sheep for three.” 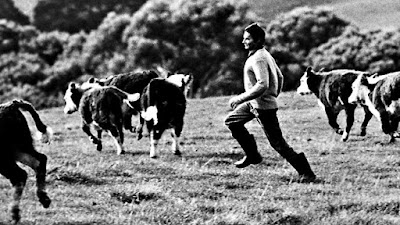 Indeed, after the race, Young told the press he kept himself motivated and focused by imagining there was a storm coming and he was just rounding up sheep before it came.  He did, however, sleep some during the race.  On the first day, he fell and injured his shoulder and decided to take some rest.  However, due to one of his crew members not wearing his contacts when he set the alarm to wake Young up, Young ended up only sleeping two hours the first night and was up and running after that. 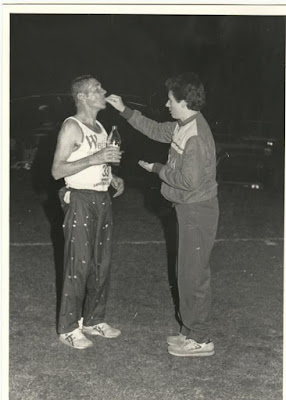 In the end, he completed the 543.7 mile long ultra-marathon in just five days, fifteen hours, and four minutes, while only sleeping for a little over 12 hours during that span.  When he won, Young earned a grand prize for the event of $10,000.  Young lived on a modest income of around $2000 per year and didn’t feel he needed any more money than that, so rather than keeping the winnings for himself, he split the money with certain others in the race and his support crew.  After the presentation of the prize, his legs gave out and he had to be carried off the stage.  A bed was then setup for him at the shopping center which was the destination of the race and he slept there for just five hours, followed by eating three plates of eggs and toast and spending the following day giving interviews.
Young again competed in the race in 1984, but due to injuring his left knee a couple weeks before the race and displacing his hip during the race, he couldn’t keep up with the front of the pack, led by 28 year old now legendary ultra-marathoner Yiannis Kouros.  Despite both of these injuries, Young still managed to finish seventh out of the nine who ultimately were able to complete the event.  He entered the competition for the third time the following year, but was forced to dropout due to pleurisy (inflammation of the lung tissue) and pneumonia.  He spent a week in the hospital following this before being allowed to go home.  As a courtesy, Westfield hired a car to drive him all the way back to Colac after he was released from the hospital.

§  Thanks to Young pushing the pack, all five other runners who managed to finish the Westfield run in 1983 managed to cross the finish line ahead of the previous world record for that distance.

§  Even though he was 61 at the time, Young still lived at home with his mother and was reportedly still a virgin to boot.  This changed pretty quickly, though.  While he didn’t use his new celebrity status for much monetary gain, he did receive the benefit of  finding a wife, Mary Howell, a woman under half his age. She later became his crew manager, though this backfired on him in the 1984 race when her inexperience caused the crew to lose him at one point, resulting in a long stretch where he had no water or food.  This compounded on the knee and hip injury to contribute to his inability to keep up with the leaders that year. 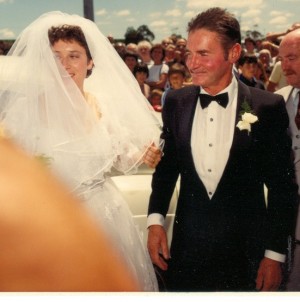 §  Young’s first race wasn’t actually the Westfield run, but an attempt a year earlier to break Siggy Bauer’s world record of 1,000 miles in 11 days and 23 hours.  He failed in his bid though, quitting after 500 miles and stating that he and his support staff had been grossly inexperienced for attempting something like that, which resulted in them being unprepared for what was needed.

§  While he didn’t manage the 1000 mile record at the age of 60, at the age of 76, he did attempt to break Ron Grant’s record in running around Australia, which is about a 10,000 mile run.  He attempted this to try to raise money for homeless children.  Somewhat humorously, his failed attempt in this case was  not because of him, but because the one and only member of his support staff became severely ill.  Before this happened, though, Young had managed to cover a little over 4,000 miles of the run.

§  About a year after this failed attempt to run around Australia, Young began having health problems that lasted about five years and ultimately resulted in his death at the age of 81 from cancer on November 2, 2003.  Remarkably, all six of Young’s brothers and sisters were still alive when he died, even though they all themselves were quite old:  Anne, 85; Helen, 83; Margaret, 79; Barry 77; Eunice, 75; and Sid, 73.  As one of his sisters stated upon his death: “He is the first of us to go, but then he was always on the go.”

§  While running in gumboots and overalls hasn’t caught on among other ultra-marathoners, using the “Young Shuffle” running style has.  For instance, to date, three other winners of the Westfield race have since used the Young shuffle.  It is thought that this style of running is the most efficient running style, in terms of energy usage.  In addition to this, many runners of the Westfield ultra-marathon no longer sleep much during the race, presumably figuring if a 61 year old potato farmer could do it, they as professional athletes should be able to.

§  During the Westfield race of 1983, Young was asked what he was going to do when he finished the race.  His response was slightly less glamorous than the standard “I’m going to Disneyland”.  Instead, he said “I’m going to the toilet first.”  And, indeed, as soon as he crossed the finish line, he went to the bathroom while the reporters waited outside.

§  In honor of Cliff Young, after his death, an ultra-marathon was named after him, the “Cliff Young Australian 6 Day Race”.  The record for that event is held by the famed Greek ultra-marathoner Yiannis Kouros, who managed to cover just over 635 miles in those six days on his first attempt.  Amazingly, he broke the record again at the age of 48 in 2005, this time covering about 644 miles.

§  Yiannis Kouros first ran the Westfield race in 1985.  He won it in his first attempt, breaking Young’s record by about 10 hours and went on to win the Westfield run five times between 1985 and 1991, which was the last year it was held.

§  Ultra-marathons take place nearly everywhere on Earth, including Antarctica.  The biggest one held in Antarctica is actually part of a larger “Four Deserts” race.  The event begins in Atacama Crossing in Chile, which is among the driest places on Earth, comprising mostly of salt lakes, volcanoes, and sand dunes.  Not only is the desert brutal, but it is at an altitude of 8000 feet.   The next stage of the race is in Gobi, China.  This is among the hottest places in China and the race covers sand dunes, dangerous water crossings, and steep hills.  The third stage of the race is in the Sahara desert, in Egypt.  The daytime temperature during this stage can reach 122 degrees Fahrenheit.  The fourth and final stage of this race is in Antarctica.  The temperatures here are often below 0 degrees Fahrenheit and the course and time of events varies greatly from day to day based on environmental conditions.» 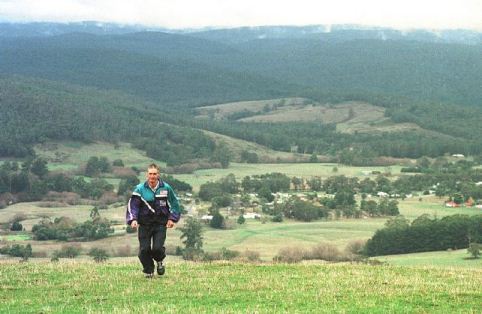 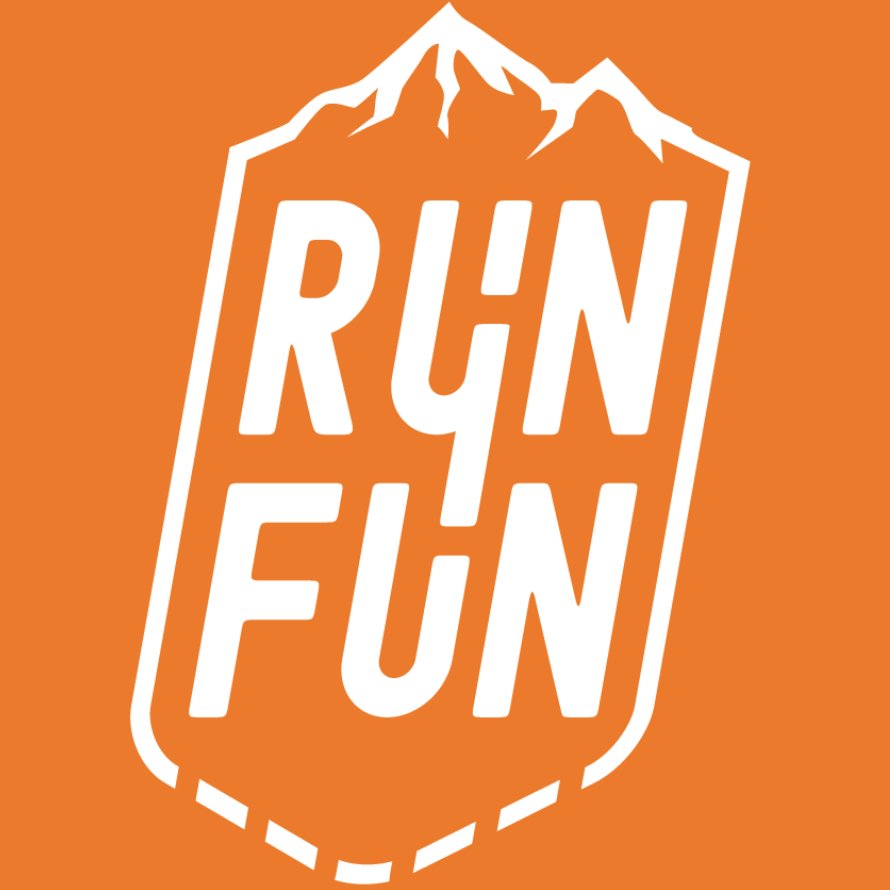 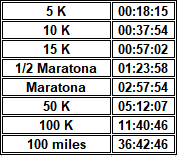 Even though I walk through the darkest valley, I will fear no evil, for you are with me; your rod and your staff, they comfort me... 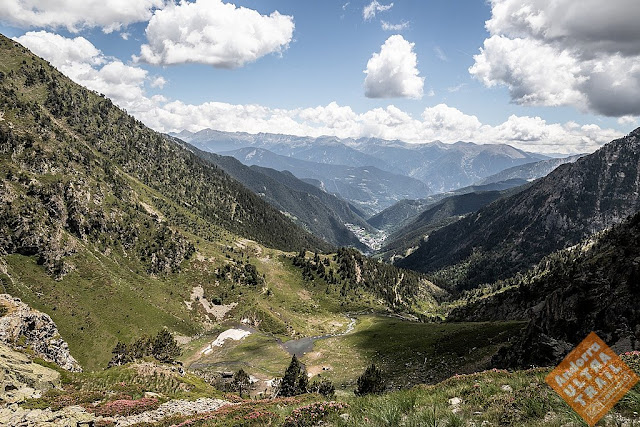